By
17th March 2019
110
0
Hi friends, “BEST IITJEE PREPARATION BOOKS” welcomes you, in this post i am going to tell you about a extremely high level difficulty book that is called as ” PROBLEMS IN GENERAL PHYSICS- I.E IRODOV”.
Guys a single question of this book took me much more time then the other books. The questions are very high order thinking skills and you have to deeply grab all the concepts before trying it to solve. This book is basically for the students persuing higher education in physics, this book contains more than 1800 problems to be practice and provided hints for the most difficult one too. The rules are given in short forms but it is assumed that the student must knew about the use of formula and how it has been derived.
This book of problems is intended as a textbook for students at
higher educational institutions studying advanced course in physics.
Besides, because of the great number of simple problems it may be used
by students studying a general course in physics. 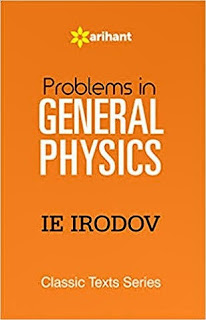 The book contains about 1900 problems with hints for solving the
most complicated ones.
For students’ convenience each chapter opens with a time-saving
summary of the principal formulas for the relevant area of physics. As a
rule the formulas are given without detailed explanations since a student,starting solving a problem, is assumed to know the meaning of the quantities appearing in the formulas. Explanatory notes are only given in those cases when misunderstanding may arise.
All the formulas in the text and answers are in SI system, except in Part Six, where the Gaussian system is used. Quantitative data and answers are presented in accordance with the rules of approximation and numerical accuracy.

The main physical constants and tables are summarised at the end of the book.
The Periodic System of Elements is printed at the front end sheet and the Table of Elementary Particles at the back sheet of the book. In the present edition, some misprints are corrected, and a number of problems are substituted by new one.

A FEW HINTS FOR SOLVING THE PROBLEMS:-

1. First of all, look through the tables in the Appendix, for many problems cannot be solved without them. Besides, the reference data quoted in the tables will make your work easier and save your time.
2. Begin the problem by recognizing its meaning and its formulation. Make sure that the data given are sufficient for solving the problem. Missing data can be found in the tables in the Appendix.
Wherever possible, draw a diagram elucidating the essence of the
problem; in many cases this simplifies both the search for a solution and the solution itself.
3. Solve each problem, as a rule, in the general form, that is in
a letter notation, so that the quantity sought will be expressed in the same terms as the given data. A solution in the general form is
particularly valuable since it makes clear the relationship between the sought quantity and the given data. What is more, an answer obtained in the general form allows one to make a fairly accurate judge-
ment on the correctness of the solution itself.
4. Having obtained the solution in the general form, check to see if it has the right dimensions. The wrong dimensions are an obvious indication of a wrong solution. If possible, investigate the behaviour
of the solution in some extreme special cases. For example, whatever the form of the expression for the gravitational force between two extended bodies, it must turn into the well-known law of gravitational
interaction of mass points as the distance between the bodies increases.
Otherwise, it can be immediately inferred that the solution is wrong.
5. When starting calculations, remember that the numerical values of physical quantities are always known only approximately. Therefore, in calculations you should employ the rules for operating with approximate numbers. In particular, in presenting the quantitative data and answers strict attention should be paid to the rules of approximation and numerical accuracy.
6. Having obtained the numerical answer, evaluate its possibility. In some cases such an evaluation may disclose an error in the
result obtained. For example, a stone cannot be thrown by a man over the distance of the order of 1 km, the velocity of a body cannot surpass that of light in a vacuum, etc.
Answers given as per approximation on the basis of use of formula in different forms.
The main physical SI units page is given in the end of the book. In this edition some mistakes are corrected and a lot of questions have been substituted with various values.
Contents given as per following, physical fundamental of mechanics, kinematics, fundamental of dynamics, laws of conservation of energy, momentum and linear momentum, universal gravitation, dynamics of a solid body, elastic deformation of a solid body, hydrodynamics, realistic mechanics, equation of gas states, first and second laws of heat and thermodynamics, heat capacity, kinetic theory of gases, boltzmann law, maxwell distribution, liquids, capillary effects, phase transformation, transport phenomena, constant electric field in vacuum, conductors and dielectrics in a electric field, capacitance, energy by electric field, electric current, magnetic field, electromagnetic induction, maxwells equation, motion of a charged particle in electric and magnetic field,

Download free, mechanical oscillation, elecrrical oscillations, elastic waves, electromagnetic waves, radiation, full optics consist of interference diffraction, polarization of light, dispersion, absorption of light, optics of moving source, thermal radiation, quantum nature of it,  scattering of particles, rutherford, bohr’s, thompson’s model of atoms,  waves schrondinger equations of sai function, radioactivity, alpha, beta and gama decays, nuclear reaction, fission and fusion molecules and crystals, half life of a element, their properties etc and a page of content answers.
So friends i hope you understood the importance of this book, but i recommend you to use this book after building all of your topics and have strong and deep command over the topics.
So that’s all. Keep practising regularly and remember the aim- IITJEE.

ABOUT US
Hey guys I am Yash, a student, pro blogger and the mind behind this blog and my blog is related to IITJEE PREPARATION AND ENGINEERING EDUCATION .
Contact us: support@iitianscareer.com
FOLLOW US
COPYRIGHT © IITIANS CAREER
error: Content is protected !!
MORE STORIES